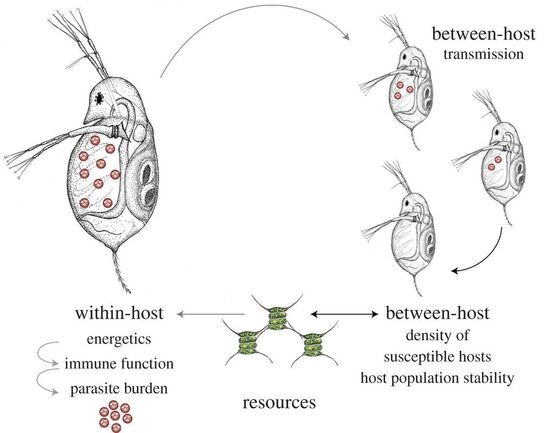 Some of the key questions motivating current research in the lab (click on the title for more info):
How do consumer-resource dynamics shape the ecology and evolution of host-parasite systems?
The consumer-resource interaction is perhaps the fundamental interaction in ecology, shaping the dynamics of populations and serving as a building block for food webs. This interaction also has important implications for host-parasite interactions as well, for at least reasons. First, the immune system requires investment of resources, so any immune response to infection will be affected by resources, either positively or negatively (if, for example, there are trade-offs between digestion and immunity). Second, parasitism, by definition, involves the "theft" of resources from a host, so parasites are directly affected by host resource acquisition. Taken together, these two points suggest the potential for resource-mediated competition between parasites and immunity, in addition to the typical killing response (see here for more on our approach to this question). Third, the consumer-resource interaction can influence host population dynamics, influencing the availability of hosts to the parasite. Finally, parasites can also influence host population dynamics, setting up feedbacks between the population scale (with resources influenced by both consumer and parasite) and the individual scale (with resources influencing the immune-parasite interaction), which can drive the epidemiology and evolution of parasite traits (see here for more). We develop general theory to predict how consumer-resource and host-parasite interactions influence one another, and test those predictions experimentally with Daphnia and its parasites (for an example, see here) and Drosophila (in collaboration with Dr. Kristi Montooth at UNL).
Why are some parasites specialists, whereas others are broad generalists?
Parasites vary widely in the number and phylogenetic diversity of hosts they infect. Understanding what factors determine a parasite's host range has important consequences for parasite spillover into new hosts, identifying "missing hosts" in a parasite's range, and determining transmission risk. One approach to understanding these factors is to take advantage of the many massive databases of host-parasite associations that have come online in recent years, including the database from the Manter Laboratory of Parasitology here at UNL. To make sense of the patterns found in these data, we develop general theory to predict how aspects of ecology and host physiology (e.g., body size) influence parasite range, and then look for empirical support for those predictions in data (see here for more). This work draws inspiration from ideas in epidemiology, metabolic theory, metapopulation theory, and community ecology to understand how host range evolves. Working with colleagues in the NSF RCN "Macroecology of Infectious Disease," we are also seeing what else these massive databases can tell us about host-parasite systems, for example by building parasite phylogenies to allow us to look at patterns of cospeciation and to test phylogenetic hypotheses about the evolution of host range.
What drives variation in infection duration and parasite burden among hosts?
One of the most ubiquitous patterns in parasitology is the aggregated distribution of parasite burden among hosts in a population, where most hosts have very few parasites, while a few have many parasites (e.g., Shaw et al. 1998, "Patterns of macroparasite aggregation in wildlife host populations"). Many explanations for this pattern have been proposed, including mechanistic explanations based on variation in host and parasite traits and purely statistical explanations based on constraint. A potentially related pattern is the variation in infection duration among hosts. Even in carefully controlled lab environments, using inbred mice exposed to identical doses of genetically identical parasites, we observe considerable variation in infection duration, with some animals never becoming sick, some clearing the infection in days, others in weeks, and others in months. Using a combination of mathematical models and experimental studies in lab and field with our collaborator, Dr. Andrea Graham, we are seeking to understand how the interactions between host energetics, immunity, and parasites can explain variation in both duration and burden.
How does transmission of the microbiota influence ecological dynamics?
Determining the effects of the microbiota on ecological interactions and host population dynamics is an important open question. Research has convincingly demonstrated that the microbiota has important effects on how hosts grow, develop, reproduce, and fight infection, documenting both the unique biological functions that the microbiota provides and its interactions with host physiological processes. These strong effects on individual hosts suggest that the microbiota should also affect how the host population interacts with its environment, such as its resources and pathogens. However, understanding the effects of the microbiota on individual hosts is not sufficient for predicting its effects on host-environment interactions: we must also understand how the microbiota are transmitted from host to host. The need to understand both the individual-level effects of microbes and how they transmit in order to predict their population-level effects is well-established by studies of pathogens: a pathogen may be highly virulent to individual hosts, but have a negligible effect on host populations if it fails to transmit effectively. Analogously, a beneficial microbe may have a large effect on individual host health, but a negligible effect on host-environment interactions if it fails to transmit effectively. We use Daphnia as a model organism for the study of microbiota transmission. Daphnia offer several key advantages as a model system. The Daphnia microbiome is fairly simple, and the host environment (including diet) can be carefully controlled. Daphnia is a model system for quantifying the individual- and population-level consequences of pathogenic transmission, and methods for tracking pathogen transmission in Daphnia can be readily modified to study microbiota transmission. Finally, Daphnia have a well-studied natural ecology (especially compared to other model systems), providing essential natural context that can guide lab experiments.